The Jerks of Academe

his morning you probably didn’t look in the mirror and ask, “Am I a jerk?” And if you did, I wouldn’t believe your answer. Jerks usually don’t know that they are jerks.

Jerks mostly travel in disguise, even from themselves. But the rising tide (or is it just the increasing visibility?) of scandal, grisly politics, bureaucratic obstructionism, and toxic advising in academe reveals the urgent need of a good wildlife guide by which to identify the varieties of academic jerk.

So consider what follows a public service of sorts. I offer it in sad remembrance of the countless careers maimed or slain by the beasts profiled below. I hope you will forgive me if on this occasion I use “he” as a gender-neutral pronoun.

his morning you probably didn’t look in the mirror and ask, “Am I a jerk?” And if you did, I wouldn’t believe your answer. Jerks usually don’t know that they are jerks.

Jerks mostly travel in disguise, even from themselves. But the rising tide (or is it just the increasing visibility?) of scandal, grisly politics, bureaucratic obstructionism, and toxic advising in academe reveals the urgent need of a good wildlife guide by which to identify the varieties of academic jerk.

So consider what follows a public service of sorts. I offer it in sad remembrance of the countless careers maimed or slain by the beasts profiled below. I hope you will forgive me if on this occasion I use “he” as a gender-neutral pronoun. 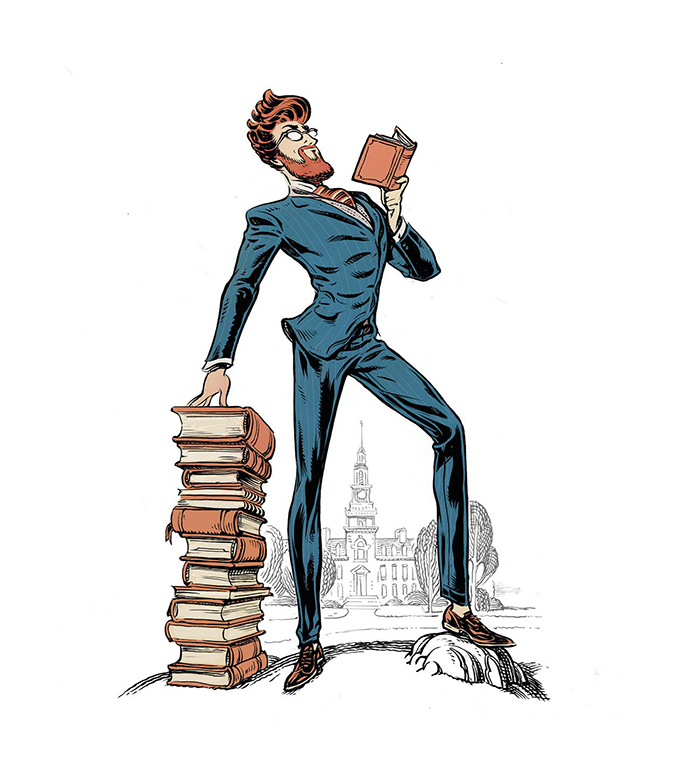 The Big Shot is the most easily identified of all academic jerks. You can spot him a mile away. His plumage is so grand! (Or so he thinks.) His publications so widely cited! (At least by the right people.) His editorial-board memberships so dignified! (Not that anyone else noticed.) You will never fully appreciate the Big Shot’s genius, but if you cite him copiously and always defer to his judgment, he’ll think you have above-average intelligence. 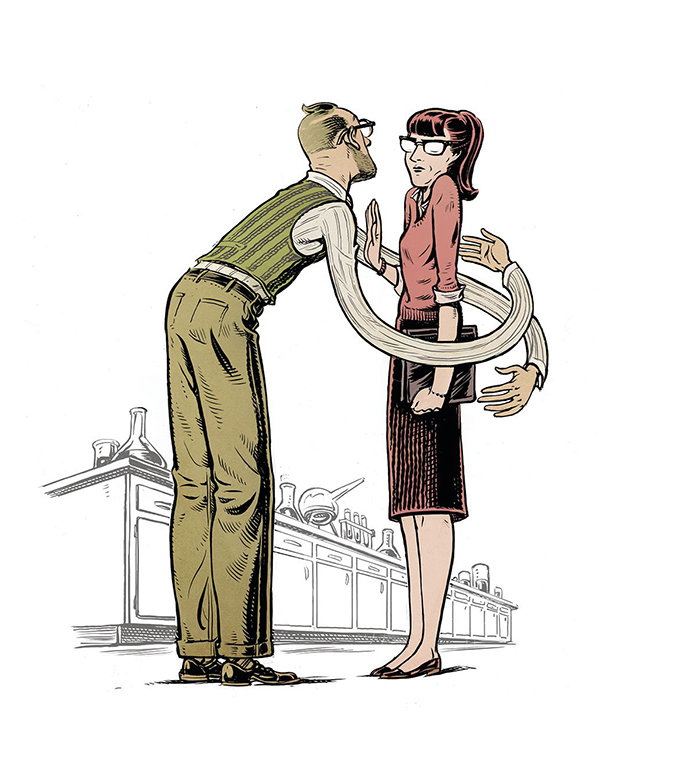 To those unfamiliar with his ways, the Creepy Hugger appears the opposite of the Big Shot. He will seem kind, modest, and charming, despite his impressive accomplishments. This is his alluring disguise. You will flee to him for comfort and protection after abuse by the other types of academic jerk. The Creepy Hugger with lecherous motivations is one variety, but not the only one, nor the most common. More frequently you’ll encounter the type who takes advantage of his power to extract favors and “friendship” that you would not otherwise give. His arm is around your shoulder while he complains about his colleagues. He invites you for beers that you feel obliged to consume in feigned bonhomie. You meet his family and are expected to be sweet and sociable. Because you are so nice, and because he seems so enamored of you, you proofread his drafts and help organize his office. Soon, he will be distracted by someone better and forget you exist — unless he can gain advantage by presenting you as his protégé. 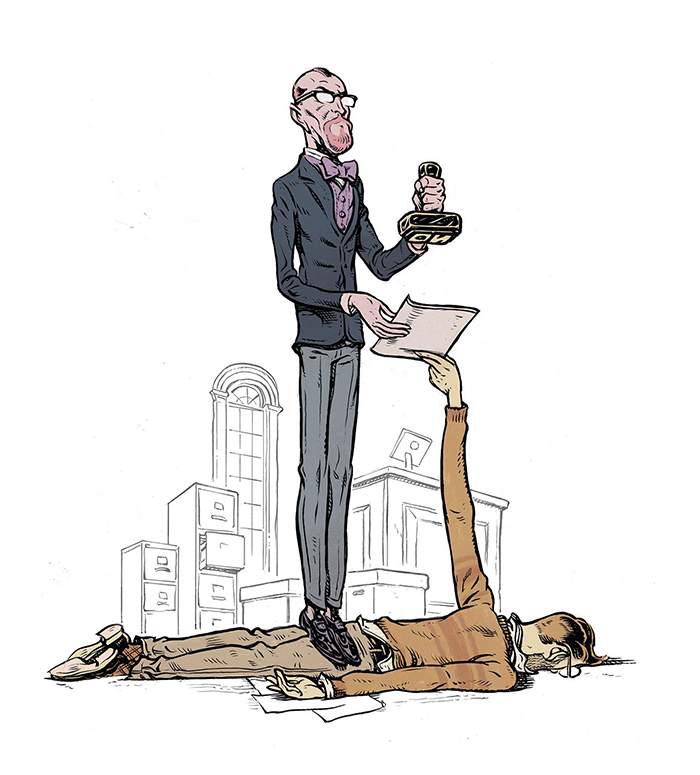 You will recognize the Sadistic Bureaucrat by the little smile he can’t quite suppress as he informs you that your reimbursement application was not completed correctly. Your visa-approval process is delayed. The only available time slot for your class is seven in the morning, and your sabbatical request is denied. He is really so sorry. But, he reminds you, the policies are clearly listed in the faculty manual. It would be unfair, don’t you see, to make an exception. Somehow, his friends don’t seem to suffer under the policies in quite the same way. The Sadistic Bureaucrat washes away his moral qualms about granting exceptions to others by relishing his great fairness and rigorous principle when applying the rules to you. 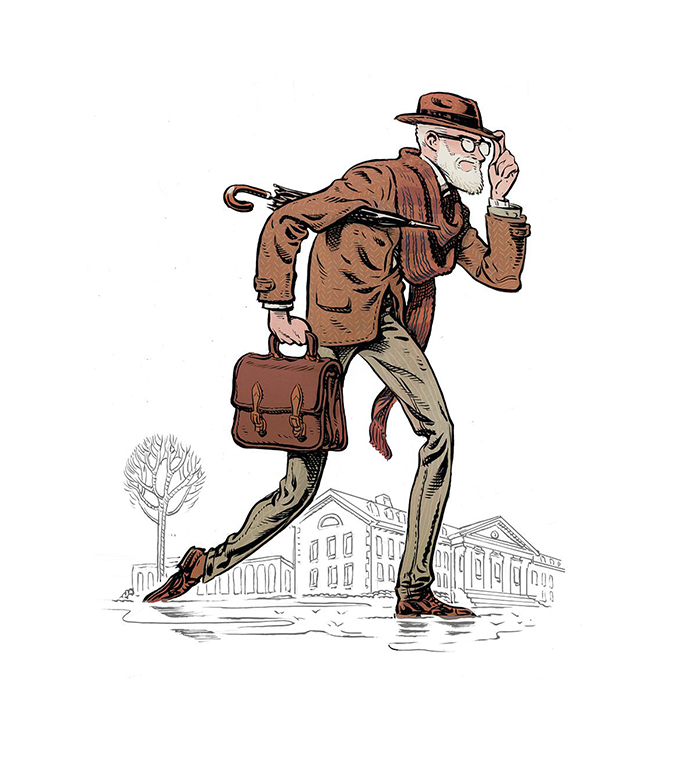 You and the Embittered Downdragger agree that the Big Shot is not nearly as brilliant as he imagines — neither, the Downdragger adds, is that other scholar, whose work you rather admire. The Embittered Downdragger is distinctly unimpressed that you finally managed to publish in a so-called “elite” venue. And your great teaching evaluations? They prove only that you cater to student demand for easy A’s. The Embittered Downdragger has only published a few articles. His students complain about him. He serves no important administrative role. This is because he knows that the system is corrupt. He rolls his eyes at the award you just won and the invitation you just received, of which you had, until then, felt rather proud. His “no” vote can be relied on for every policy change, every new initiative, and every tenure case.

he Big Shot. The Creepy Hugger. The Sadistic Bureaucrat. The Embittered Downdragger. This list is not exhaustive, nor are the types exclusive. Jerkitude manifests in wondrous variety, and not all the species have yet been cataloged. Hybrids abound — for example, the past-his-prime Big Shot who is becoming an Embittered Downdragger.

If you spot one of these jerks in the wild — at a conference hotel, on the other side of the seminar table, at a campuswide committee meeting — react as if you had spotted a bear. They are dangerous, unpredictable creatures, best avoided if possible. Do not try to cuddle up close, thinking you can befriend them without getting hurt. Do not try to seduce them with treats. Walk as far away as possible. Jerks are best viewed from a distance.

If surprised up close by an angry jerk, stand tall, if you can raise yourself to intimidating height. If it’s a grizzly, though, play dead.

But what if you are the jerk?

It’s generally difficult to recognize and acknowledge one’s vices. No one wants to see themselves as flaky or vain. We try to ignore evidence of such character deficiencies in ourselves, and we find rationalizing excuses. But if we look close enough and long enough, we can wincingly recognize such shortcomings.

Self-knowledge of jerkitude is more recalcitrant. Big Shots will not see themselves as Big Shots — at least not that kind. Sadistic Bureaucrats and Embittered Downdraggers will rarely recognize the true shape and extent of their awfulness. We can admit, when pressed, that we are flaky and vain, but we can’t admit, not deep down, that we are the Creepy Huggers students whisper about in the halls.

If you spot one of these jerks in the wild — at a conference hotel, on the other side of the seminar table, at a campuswide committee meeting — react as if you had spotted a bear.

Illegitimately devaluing others’ goals and ignoring their opinions — this is the essence of being a jerk. It’s a peculiarly epistemic vice, one that works to prevent its own detection by painting the world in seemingly objective, self-flattering colors and by thwarting the jerk’s ability to respectfully hear others’ critical feedback. Jerkitude flourishes in ignorance of itself.

But all hope is not lost. Though I doubt that the most horrible jerks among us will ever change their ways, the best chance to attain a glimmer of self-knowledge is to think phenomenologically — that is, to think about how the world in general looks through your eyes, and then to compare that vision with the world as seen by the jerk. Do you see the world through jerk goggles?

You’re important, and you’re surrounded by idiots! You can’t believe they gave that award to that absolute dolt. Her work isn’t nearly as good as yours. And why are you wasting time with this student? Can’t he see you have a ton of important things you need to get done? That new article should have cited your work here and here and here. Is the author ignorant? Is she intentionally downplaying how much she’s borrowing from you? Ugh, your colleague is making a case for a distinguished professorship, but you’re clearly more deserving. No need to read work by scholars you haven’t heard of. It can’t be good if they aren’t well known. … You’re thinking like a Big Shot.

You’re not like those other professors, formal and standoffish and so full of themselves. You’re an egalitarian. Your students are peers, and, well, you guess you’re kind of cool. It’s kind of big of you to step down from the social hierarchy like this, relating so well with your inferiors — whoops, you didn’t mean “inferiors”! It’s fun that you can tease her, call her an “asshole” in a joking way, say her thesis work is totally stupid. She knows you’re just razzing her. It sure is nice of her to help you organize your office. You guess you do kind of deserve that, because — whoops! You mean, of course you would do the same for her … You’re thinking like a Creepy Hugger.

Box A — correct. Box B — correct. Box C — oh, tsk, tsk … no, no, no. This will need to be redone. You can’t approve it this way. They did it wrong, and the policies aren’t really under your control. Option A: If the excuse is from a friend. Ah, you see the problem! Of course, we can get this fixed. The rules serve us, not us the rules. Mistakes happen — we’re human, after all. Option B: If the excuse is not from a friend. The rules need to be applied consistently. It’s only fair to the others. Clear rules are what make institutions work, and it’s important to be even-handed and careful. Did you just now feel a little rush of pleasure at the power you exerted over them? No, of course not! Really, it’s too bad they’ll have to return to their home country/not get sabbatical/lose the grant money. You’re sorry — but not too sorry — about all the trouble this is causing. … You’re thinking like a Sadistic Bureaucrat.

You’re important, and you’re surrounded by idiots! You’re thinking like a Big Shot.

Wow, you find this description of jerks to be so on target! You’re not like any of them! The whole system is rotten. Peer review is basically a scam. And the students — lazy complainers! None of them really deserve A’s, but with all the grade inflation, you’ll have to give out a few good marks. You give sarcastic congratulations to your friends on all their “great success.” … You’re thinking like an Embittered Downdragger.

I have drawn these four types as caricatures. We — you and I — know we’re not that awful … right?

But there’s a reason I find it so easy to imagine the inner life of these jerks. It’s my own inner life, sometimes. I catch myself thinking in these ways, and I worry. That sting of worry is the moral self-knowledge I treasure — the seeing that it is so, which makes it less so.

A version of this article appeared in the February 14, 2020, issue.
We welcome your thoughts and questions about this article. Please email the editors or submit a letter for publication.
Leadership & Governance
ADVERTISEMENT
ADVERTISEMENT