Language and writing in academe. 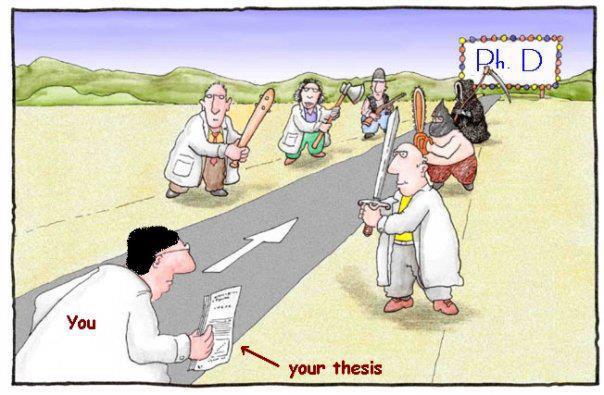 A topic sometimes discussed in the faculty lounge is the dreaded Ph.D. oral exam. As a faculty member who has chaired and otherwise participated in many of these events, I’m tempted to think that I’ve seen them all. I don’t recall ever being taught about how to chair one, and I’m sure that I was never instructed in how to take one effectively.

A topic sometimes discussed in the faculty lounge is the dreaded Ph.D. oral exam. As a faculty member who has chaired and otherwise participated in many of these events, I’m tempted to think that I’ve seen them all. I don’t recall ever being taught about how to chair one, and I’m sure that I was never instructed in how to take one effectively.

As far as I know, there is no standard practice about how to conduct or take an oral exam for the Ph.D. Variations appear to be wide. I was told of one very informal one that took place in a coffee shop. At the opposite extreme, I was a member of one in which 10 examiners caused it to continue for six hours with no breaks. My own oral exam took place 60 years ago and lasted four hours, accompanied by the comings and goings of various faculty members, some from whom I’d never even taken courses. Three of the 10 questioners were from other departments that seemed to be not very related to my field of study. I survived it, but I’ll certainly never forget it.

My experience with fellow faculty members has been that some try to replicate their experiences during their own orals. Some prefer to test students’ memories of details. Others pose problems that require students to think on their feet. Still others request students to evaluate the importance, strength, or weakness of the course information the students purportedly had acquired. And some ask how the examinees plan to use their accumulated knowledge and skills in the future.

Many students develop such a deep dread of this event that they put it off for as long as possible, which tends to increase their anxiety, create the possibility of memory loss, and ignore any new developments in the field that took place during their delay.

The saddest oral exams are ones in which the committee has no real choice but to fail students because of their poor performances. It’s not hard for faculty members to accept at least some of the blame because they should have noted such weaknesses while those failed students were still taking their courses. Maybe they didn’t give their students sufficient opportunities to perform orally in the classroom. They may wonder whether they made it clear that successful students, besides absorbing the content of the field, also have to be able to engage in intelligent discussions about it.

Policies about failing the oral exam vary among departments and universities. Some professors insist that the orals are the capstone of Ph.D. studies and if students fail, it’s all over for them. My inclination is to give the failed students a second chance now that they’ve tasted what the committee wants of them. Sometimes I’m right and the student does very well the second time, while those who fail it again at least can know that the faculty members have bent over backward to let them redeem themselves.

It’s appropriate for a committee to worry about students who fail their orals, but the worst cases are those who are so terrorized that they go blank and can’t manage to utter anything useful. The exam committee may believe that these students had learned enough to represent their competence, even though it didn’t help to give them subtle hints about how to answer. This tense occasion simply traumatized them.

I’ve experienced a few such cases, and I can’t say that things worked out well for most whose minds went blank. One examinee told me afterward that he didn’t really want to get a Ph.D. because it would stigmatize him with his peers. He simply wanted to go back to his former high-school teaching job. That was his privilege, and it may have been wise in his case. After another student retook her oral exam and repeated her emotional inability to demonstrate what she knew, she decided to give up the idea of getting a Ph.D. That too was her privilege, and it also may have been wise. A third examinee declined our offer to let her retake her orals but then sent a series of hate-filled letters to her committee members, telling us how we had ruined her life. That was hard to for us to take.

As traumatic as the Ph.D. oral exam may be, many survive it and go on to have good careers. But others may recall it as one of the most difficult experiences in their lives. I know that my own exam certainly was. I sailed through most of it until during the third hour my mind went blank on one question. As I left the room while the committee deliberated my fate, I sat in the hallway, expecting them to fail me. Fortunately, my committee passed me, telling me that I couldn’t be expected to endure the dreaded oral exam without at least one slip-up. We all shook hands, and I guess they were right because I went on to have a pretty good academic career. Maybe that’s how the dreaded oral exam ought to work.
Roger Shuy is a professor emeritus of linguistics at Georgetown University, where he created and led its doctoral program in sociolinguistics.