A One-Line Program as Book: <cite>10PRINT</cite>

[This is a guest post by Kathi Inman Berens, who curates electronic literature and researches classroom interfaces. This year, she’s co-curating e-lit exhibits at MLA and the first-ever e-lit show at the Library of Congress. She teaches at USC, where she’s a Fellow at the Annenberg Innovation Lab. Follow her on Twitter at @kathiiberens.

[This is a guest post by Kathi Inman Berens, who curates electronic literature and researches classroom interfaces. This year, she’s co-curating e-lit exhibits at MLA and the first-ever e-lit show at the Library of Congress. She teaches at USC, where she’s a Fellow at the Annenberg Innovation Lab. Follow her on Twitter at @kathiiberens.--JBJ]

Lifting up the 10 PRINT CHR$(205.5+RND(1)); : GOTO 10 hardcover, one’s first impression is: I’d better use both hands. It’s a heavy art book compressed to the physical dimensions of a typical academic monograph, though it is anything but typical.

Designed by Casey Reas (one of 10PRINT‘s ten co-authors, many of whom have been collaborating recombinantly for years), this glorious hardback is not just a container, a div for prose, but a beautifully realized art object. Check out these images on Reas’ 10PRINT Flickr stream. Even the book’s paper edges seem aestheticized, marbled by cerulean ink meandering from the book’s seventy-plus monochromatic illustrations and chapter breaks. 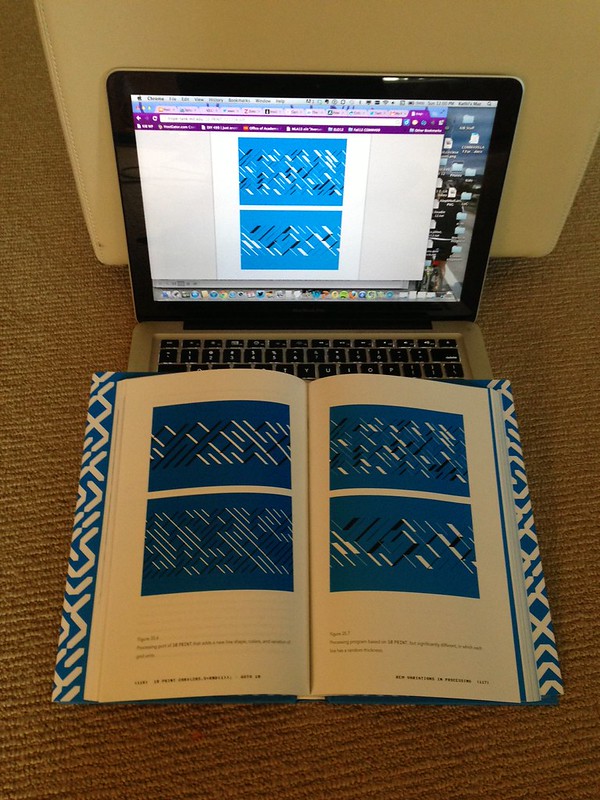 Tactile and visually rich, the 10PRINT aesthetic experience is compromised for readers of the free PDF. Book pages displaying four mazes (116-17, for example), entirely lose their effect when stacked in the .pdf as a vertical pair. Are the aesthetics of the 10PRINT book non-incidental -- are they in fact crucial -- to the book’s argument? I think so, but I can’t yet fully explain why. The book dropped four days ago. For humanists that’s a nanosecond.

But it’s enough time for some of the book’s other audiences to already have logged many hundreds of lines of code and conversation, to have created, even, a “cheaty ProcessingJS” emulation of the BASIC maze (authored by Ph.D. candidate Kevin Brock). Humanists’ tools aren’t like that. Interpretation takes a while to warm in the fire. 10PRINT knows this. The book’s deft thematic weaving, its meld of ten voices into one, bespeaks patience, slowness.

For those familiar with the Commodore 64’s output, 10PRINT‘s dust jacket might seem a simple remediation of the maze produced by the book’s “mouthful” of a title. The cover illustration seems to be a white maze overlaying a blue screen, but it’s not. The white bits are made of shapes, Xs that shatter into repeating squares and broken rectangles. The “real” maze, made of forward slashes [/] and back slashes [\], printed on the book’s endpapers, is made to look faded and pixelated as if traveling through time: visually distressed like faux antiques whipped with chains to chip away at veneer.

Such a book coaxes humanists to open it.

Sure, there’s a lot of code. But if you were expecting 10PRINT to read as like a View Source window, you might be delighted (comforted?) to find familiar contexts and theories anchored in medium-specific practice of all kinds. Where programmers see forward and back slashes forming shapes that are functionally distinct -- a maze is multicursal, with many paths through it, a labyrinth unicusal -- the 10PRINT authors ask “would programming be meditating, dancing, escaping, solving, or architecting a maze? Would the user be Theseus or Daedalus?” (49).

Such questions seem like “bullshit” to some of the programmers on the Slashdot and Reddit 10 PRINT threads. But trash talking seems an ordinary part of hacker culture. It’s too early in 10PRINT’s reception to gauge the book’s success in creating conversations that “transcend” (xi) Twittersmack -- er -- disciplinary borders.

At the very least the book’s sudden and surprisingly popular reception indicates that 10PRINT is poised to be this year’s Debates in DH: a book regarded as field-defining, and about which conversation might continue all year long. Amazon’s stock of 10PRINT sold out in 3 days (see this handy chart to find your own hardback copy). The free .pdf available at 10print.org has logged over 12,000 downloads as of yesterday morning.

Though some programmers may deride BASIC as the language of “children and amateurs” (159), the authors were right to travel back to the future. They anticipated the overlapping needs of their various audiences accurately and with gusto.