ProfHacker: Choose Your Own Classroom Adventure with inklewriter

Choose Your Own Classroom Adventure with inklewriter 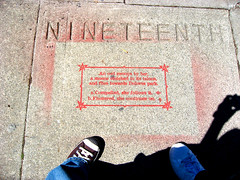 Most eBooks are still pretty boring as objects: text, pictures, maybe a video or interactive visualization in a more experimental work. But that landscape may be changing, thanks in part to the number of cool free tools for

Most eBooks are still pretty boring as objects: text, pictures, maybe a video or interactive visualization in a more experimental work. But that landscape may be changing, thanks in part to the number of cool free tools for building interactive books. One of these platforms, inklewriter, has some great potential for use with students in the classroom or for creating interactive stories or texts.

Last week, Inkle Studios released “Future Voices,” a curated collection of stories produced with its interactive story development tool. This slick iPad app features the tech behind Frankenstein, an interactive adaptation of Mary Shelley’s novel by Dave Morris. Play through any of these stories for a while and you’ll see everything from straightforward choices of action to complex moral dilemmas and experiments. You can also check out many experiments on the web, including Emily Short’s Holography--she’s also written some thoughts on inklewriter as a platform.

While Inform 7 (as discussed last week) uses a parser interface based on interpreting a broad range of user actions (get lamp, open door, look at book, etc.), Inklewriter uses an interaction model similar to ‘80s Choose Your Own Adventure gamebooks, which recently came back into print and made the transition to eBooks. However, it goes beyond any of the simple page-shuffling models of those past books in part because it can keep track of decisions and variables from the user’s actions.

Inklewriter has a great tutorial “story” to introduce writers to the platform. The interface, shown below, is mostly free of distractions and built around creating story nodes and choices:

Most of the complexity comes from keeping track of connections, which are identified as “loose ends” until they are linked to another story node, and adding conditions to the availability of options. Conditionals are based on if/then logic pulled from story exploration thus far--so for instance, if the player has visited their house and checked their email, they may have an option to head to a meeting that a player who ignored their email wouldn’t see. A built-in story mapping tool helps the author keep track of these conditions and connections.

Inklewriter and similar platforms like Varytale also offer the potential for mapping out interactive narratives for other settings. The above photo is from a “live” choice-based story stenciled onto the sidewalks of the Mission District in San Francisco--I can imagine planning such a story with students using one of these tools, then installing it in an appropriate setting.

Personally I’d like to try building a textbook in inklewriter, perhaps one for programming or another self-guided topic that could be paced and refocused according to user choices. Inklewriter offers a paid service to convert story files to Kindle eBooks, which can then be sold through Amazon. Anyone can publish web-based versions of their stories for free.

I’ll be trying out inklewriter in my Interactive Narrative class. Have you tried inklewriter or played through any of the stories on the platform so far? Share your experiences and ideas for using or making interactive books in the comments!