ProfHacker: How I Trick Myself Into Clearing Grading Backlogs

How I Trick Myself Into Clearing Grading Backlogs 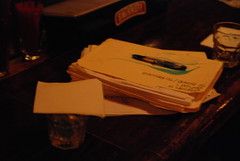 Even before I became union president, it was fair to say that my worst trait as a teacher was that I was slow with grading. This is an odd mix of the usual procrastination and overcommitment, on the one hand, and my own personal preference for slow-ish feedback on the other. (As a student, I took criticism of my writing less personally after a solid cooling-off period.)

Even before I became union president, it was fair to say that my worst trait as a teacher was that I was slow with grading. This is an odd mix of the usual procrastination and overcommitment, on the one hand, and my own personal preference for slow-ish feedback on the other. (As a student, I took criticism of my writing less personally after a solid cooling-off period.)

It turns out that the union responsibilities have only exacerbated this--especially this semester, with all the budgetary craziness in Connecticut. Making matters worse is the fact that I have a section of composition, which is surely the most grading-intensive course in English departments. Once I start to get behind in grading, things snowball rapidly, as I invariably decide that it’s important to offer a level of feedback that somehow justifies the tardiness, which is kind of impossible, and so the papers get later and later. (It’s always important to remember Steven D. Krause’s observation that comments are for the students’ improvement, not to justify your work or judgment.) It’s a pretty awesome situation.

When I was younger, there was no grading backlog that an all-nighter couldn’t solve. But this 39-year-old bounces back from all-nighters much more slowly than he used to. Plus, what drove the all-nighter--besides caffeine!--was looking forward to the sensation of handing back all the papers at the end of class in the morning. Transferring the papers out of my physical possession was such a tremendous victory that I could power through the small, dark hours of the morning. Now, the whole transaction is electronic, and so there’s not that same satisfying feeling of completion at the end of a grading binge.

Clearly, a new strategy was needed! And, lo--here it is:


Schedule appointments with students to discuss their writing, at which point you return their work.

Obviously, these could be virtual appointments if need be--for example, in an online class. And equally obviously, you can’t schedule appointments with all your students in one day, or you lose the benefit of the scheme. But if you break the appointments out over several days, the result is a fixed calendar of how much grading you have to get done, and by when. Convenient!

The simple trick here is that I can’t fail to be prepared for the individual appointments, and so the grading has to be done. There’s always something else meaningful that we could be doing in class, and so I don’t feel the same panicked sense that I’m letting the students down if I walk into class without having returned the papers electronically. But there’s no way to face the students in my office one by one and say, “yeah, I didn’t get your paper done.”

Adopting this strategy has other ancillary benefits, too: you can be clearer about which comments are important and why; it’s easier to see whether students understand your comments; and students have the opportunity to ask questions that they might not in class or even over email. But the main thing that it does is force me to do what you’re supposed to do anyway: make a schedule, and stick to it.

Other than staircase grading, do you have a trick for clearing the grading backlog? Let us know in comments!