ProfHacker: Move Quickly from Idea to Draft with Notational Velocity

Move Quickly from Idea to Draft with Notational Velocity 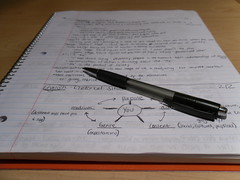 nvALT is a Mac application that lies between conventional text editors and elaborate external-brain programs such as Evernote, DevonThink, and OneNote. nvALT is a fork by Brett Terpstra and David Halter/Elastic Threads

nvALT is a Mac application that lies between conventional text editors and elaborate external-brain programs such as Evernote, DevonThink, and OneNote. nvALT is a fork by Brett Terpstra and David Halter/Elastic Threads, of Notational Velocity, which is designed to be as friction-free a way to take notes as possible.

The basic idea of the app is that you just start typing. If what you’re typing matches text you’ve already entered, those notes come up for possible editing; if what you’re typing is wholly new, then the app creates a new note. Simple formatting is possible, and you can sync your notes across machines in a variety of ways. LifeHacker has a video showing off the virtues of Notational Velocity here, and Ben Brooks explains some of the strengths of nvALT. Eddie Smith has often written about ways to use nvALT, and Caleb McDaniel has shown how to use Notational Velocity as an easy task management system (previously linked). More generally, I can say that every piece of writing that I’ve done over the past 9 months or so that’s not an e-mail, a wiki contribution, or a Google Docs collaboration has been done in nvALT. It’s the easiest way to get from “in my head” to “drafted” that I can think of.

I mention all of this simply to point to two new developments this week: first, a new version has been released, and with it the announcement that, going forward, nvALT will merge with the main release of Notational Velocity. That should make things more consistent for users. The arguably more exciting news is that Elastic Threads has released new browser extensions for Chrome and Safari that make it even easier to get information (either the current page, a linked page, or selected text) into your notes. If you are looking for low-stress ways to turn your otters into actual writing, nvALT is worth a look.

Marginally-related, but too awesome to ignore: Worth a look in the land of text editors: Kieran Healy has helpfully mapped several text editors onto Lord of the Rings locations.

Do you have a preference in lightweight text editors/notetakers? (Especially on Windows/Linux?) Let us know in comments!