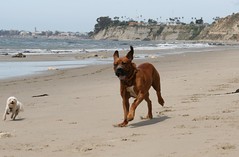 I should probably preface this review by noting that I am not a runner. It’s probably more accurate to say that, whatever the wheezy opposite of a runner is, I’m it. As a kid, I was asthmatic and chubby

I should probably preface this review by noting that I am not a runner. It’s probably more accurate to say that, whatever the wheezy opposite of a runner is, I’m it. As a kid, I was asthmatic and chubby big-framed, and while I’ve been without asthma symptoms for at least fifteen years, I’d say those fifteen years haven’t been accompanied by a radical transformation of body type.* I’m not totally unathletic: I played soccer and tennis in high school--or, rather, I practiced on those varsity teams, without seeing a great deal of playing time, largely because I hated running.

But this fall, I turn 40, and in order to live to be 150, it seems like I should probably exercise in a more organized way. Like the entire rest of the internet, I’ve turned to the Couch-to-5K program in order to make it possible to get to 30 minutes of consecutive running before the fall semester. (I think, unless my memory is wrong, that would be the first time I’ve done that ever--certainly as an adult. If I stop posting later this summer, it’s probably because I’m too cramped up to type.)

I’ve tried this once before, using Robert Ullrey’s handy series of podcasts for running, which make the Couch-to-5K program idiotproof by calling out the intervals of walking and running for you. All you have to do is focus on keeping your feet moving, and trying to ignore the searing pain. The problem with Ullrey’s podcasts, awesome as they are, is that his podcasts feature a lot of electronic music, which I personally don’t feel. (Sorry, Brian.) That time I quit after week 2.

This time, though, I’m kind of in love, even though the running hasn’t gotten much easier. I’ve been using Bluefin’s C25k app ($2.99). Like Ullrey’s podcasts, the app calls out the run/walk splits so you don’t have to think about it. The most important thing that I like about this app, though, is that it uses your own music. During week two of the program, the app offered up an Art Brut / The Hold Steady / Titus Andronicus combination about 20 minutes into it . . . and I was practically hooked. Here’s what the app looks like in use (please note: this is a Bluefin screenshot, not my phone!): 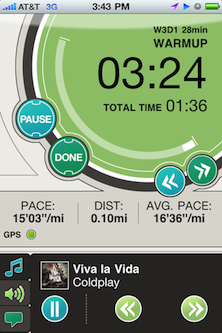 Of course the app keeps track of your workouts, too, so you know where you are in the program. And if you need to repeat some, it’s easy to pick a different workout to try. As you see here, the music controls are in-app, so you don’t have to switch apps while you’re running. And, if you want, you can broadcast your workouts to your social networks. (Personally can’t imagine doing that--although I gather the social reinforcement works for many people.)

The other thing that’s nice about the app, especially when one is weak-willed and just starting out, is that it uses your smartphone’s GPS to estimate distance run and pace, which it also graphs for you. I actually have no idea how accurate these graphs are--but I do know this: Early on in the program, when it feels as if you’re not getting any stronger and you’re pretty lame because, after all, who *can’t* run that far, anyway?, those graphs show that you’re in fact making progress. Even if the the progress is small, it’s a reason not to quit.

There are versions of the app for iOS and Android devices; Bluefin also makes apps for those interested in seeking death running 10Ks or even longer distances. And for everyone without a smartphone, or who doesn’t want to run with theirs, Bluefin will also make you a customized set of Couch-to-5K podcasts with your very own music.

Have you tried any of the Couch-to-5K programs or apps out there? Are you trying one this summer? Let us know in comments!

*Ok, there was one big change. But that was almost 100% driven by switching to Coke Zero and by refusing sugar in coffee-type products, plus a little goosing by a trendy diet.