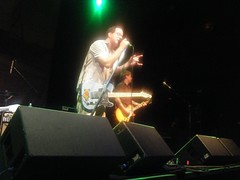 [This is a guest post by Doug Ward, an associate professor of journalism and the Budig Professor of Writing at the University of Kansas. You can find him online at www.kuediting.com and www.journalismtech.com, and follow him on Twitter @kuediting. He previously wrote on “iPads and the Embarrassment Factor.”--@jbj

[This is a guest post by Doug Ward, an associate professor of journalism and the Budig Professor of Writing at the University of Kansas. You can find him online at www.kuediting.com and www.journalismtech.com, and follow him on Twitter @kuediting. He previously wrote on “iPads and the Embarrassment Factor.”--@jbj]

Listen, I tell students. For a few minutes, just listen.

The guitar riffs of Wilco surge from the classroom speakers.

Or, depending on my mood, the melodic, folk-tinged strains of Josh Ritter sway through the air. Or the heartfelt blues of Kelly Hunt. Or the rebellious pop anthems of Kesha.

The first couple of times I do this each semester, students look at me quizzically. Inevitably, though, they listen – and they learn.

Popular music permeates students’ lives, with earbuds outnumbered only by mobile phones. With a little imagination, music can also provide an avenue for learning. For instance:

I’ve found that using popular music in lectures also increases my credibility among students. They see music as their territory, and are often surprised when a professor understands something they are familiar with – or think they are.

“Why would you be listening to Kesha?” a student asked me one day.

The answer was easy: learning.

Of course, not every song or music video works well in class. As with any other teaching technique, using music requires experimentation. Here are four that I’ve had success with.

I use this song by the Chicago-based band Wilco to get students thinking about language.

As I play the song, I write these lyrics on the board:

This is an aural arms open wide

A sonic shoulder to cry on

I ask: What does “aural” mean?

Once we’ve defined that, I go deeper: What does “aural arms open wide” mean?

Then we move to “sonic” and “sonic shoulder to cry on.”

I like to use this in lecture, but it could also work well for a writing assignment.

The song offers another possibility: At what point can a band write a song about itself and actually make it succeed? That alone is a source for an interesting comparative essay.

Kesha’s “Tik-Tok” combines elements of celebrity, teenage rebellion, and party culture (all good topics for discussion or writing assignments). The wonderful parody “Glitter Puke,” skewers celebrity culture as it pokes fun at “Tik-Tok.” It provides a great opportunity to discuss imagery but also form: What is parody? Why do we find it funny? How does it help us see through cultural elements we otherwise take for granted?

For instance, in one scene from “Glitter Puke,” the Kesha look-alike sings

As she does, she produces a contract that says, “Kesha must act like a drunken whore at all times!!!!”

The combination of the original (which nearly all students know) and the parody (which fewer are familiar with) provides an effective means for comparison. [Also possibly effective: the great Irish poet Paul Muldoon discussing the poetics of Ke$ha.--@jbj]

On top of that, the parody has more views on YouTube than the original. Explain that, students.

The premise behind this Josh Ritter song is outlandish: A mummy being transported by ship from Egypt to New York comes to life and falls in love with an archaeologist.

In Ritter’s hands, though, the song mesmerizes, largely because of its magnificent poetry and haunting melody (a folk-infused waltz).

I recently played the song in class, asking students to listen to the words and try to determine what the song is about. They caught on to the love story but not to the mummy element – exactly what I wanted.

Next, I showed a music video of the song. The video, created by Liam Hurley of Ritter’s Royal City Band, involves marionettes that enact scenes in a tomb, on a ship, in a museum, and at a press conference.

When students learn of the premise behind the song, some gasp. Young women, especially, seem taken aback by the idea of an archaeologist kissing a mummy. That premise, though, is what makes the song so effective in the classroom: It forces students to think about things like life, love, aging, and death. How would people react if a mummy came back to life and acted like a person rather than a monster? Why does Ritter use a waltz (not an element you’d expect to find in a folk-rock song) as the musical background?

In an NPR interview, Ritter talks about creating “these little dollhouses and then burning them down.” His stories are captivating (another element for discussion) and the complexities of the writing offer many opportunities for students to analyze such things as meaning, technique, mores, cultural norms, and even the way words and pictures work together.

Oh, and to do that, they have to listen.

Do you use music in the classroom? How? What songs have you found effective in inspiring students to think?