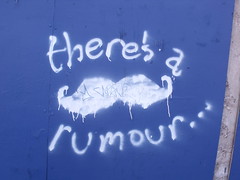 Update (5/9/2012, 9:48 a.m.): The list of student names has been removed from PSUacb. In a new note, the site’s creator wrote, “I’m not cruel enough to embarrass someone in front of the whole country for something stupid they did in college, especially when everyone at Penn State (or at least 7,846 people) has already realized you suck.”

Update (5/9/2012, 9:48 a.m.): The list of student names has been removed from PSUacb. In a new note, the site’s creator wrote, “I’m not cruel enough to embarrass someone in front of the whole country for something stupid they did in college, especially when everyone at Penn State (or at least 7,846 people) has already realized you suck.”

Campus-gossip Web sites like JuicyCampus and CollegeACB used the lure of anonymity to entice students to post on them. The cloak gave students a virtual bathroom wall on which to write racy rumors and explicit insults about their peers without fear of being exposed.

Now, the creator of a similar site at Pennsylvania State University has apparently turned that veil of secrecy inside-out, hoping to teach students a public lesson about cyberbullying.

In a bait-and-switch prank, the creator of PSUacb.com has revealed information about students who posted to the site, including their full names and Penn State e-mail usernames. Onward State, a Penn State news blog, reported the news this week.

“Fooled you,” says a note recently posted to the site, which was redesigned with a list of students’ names on the last day of the semester. After once tweeting that “its a beautiful day to anonymously judge others,” the person behind the Twitter account @PSUacb announced “check out our new design!” last week.

“90% of this website was me having [expletive] conversations with myself,” the site’s message reads. “Still, thousands of people read it. Almost every thread on this site received at least 1000 views and I’ve been raking in advertising money.”

The other 10% of the site was apparently made up of posts written by Penn State students who were never really anonymous. “I tracked the user behind every post,” the note says. The list now published on the site includes students’ names and the contents of the posts they wrote, with a promise of more to come.

“Our hope is that the ‘redesign’ will discourage students from posting this kind of content on any similar sites,” wrote one member of the group behind the site in an e-mail interview with The Chronicle, who described PSUacb as a social experiment meant to teach students about the evils of cyberbullying.

“On the Internet, people will post terrible things that they would never want associated with their true identity,” the site’s creator wrote to The Chronicle. “However, they took anonymity for granted.”

Though the identities of PSUacb’s posters have been revealed, the site’s creator would only comment anonymously, for fear of physical violence. “Although we stand behind our decision to reveal the identities of posters and we are confident that what we have done is legal, we have made some enemies with this site,” the site’s creator wrote. Angry e-mails have poured in from people whose names were published, as well as praise from leaders in the Greek community and people who had been harassed on CollegeACB, according to the site’s creator. As a concession to some of the complaints, the creator has removed the site from the reach of search engines.

The published list indicates that PSUacb was a hub for Greek life where students ranked Penn State’s fraternities and sororities. Under the topic of “Best Guys in SAE and Sig Chi,” one student wrote, “All the ladies know these guys are the best frat daddys at penn state: hot, smart, and destined to make alot of money one day (if they’re not rich already),” before mentioning a fellow student by name. Another post asked, “How were the sororities hazed this semester?? Lets hear it from the actual girls who went through the pledging.”

Gossip sites like these pose tough questions for college leaders. Some students say the anonymous forums are breeding grounds for harassment. A few colleges tried to slow down the sites in the past by blocking them on their campuses or asking their creators to remove posts that named students. But other administrators have said there’s little they can do to intervene, since the sites typically live on servers beyond a college’s control. And some have been wary to hamper students’ free-speech rights by policing online forums.

At Penn State, university police received a complaint related to the site last week, according to university spokeswoman Lisa Powers. Ms. Powers said in an e-mail interview that “there is nothing we can do by way of banning it,” since university police looked into the complaint and found it to be a free-speech issue, much like the questions that arose surrounding JuicyCampus.

“There does not appear to be threatening content—which would be actionable—and the information that was posted related to identities is directory information already available on the Web, so there aren’t any violations in that regard that can be remedied either,” Ms. Powers added. She wrote that it’s likely that student-affairs administrators will have more conversations with students about their online activity, especially in the Greek community.

“Members need to be more educated and understand all ramifications of what they do online,” Ms. Powers wrote. “If fewer people visited these types of sites and fewer participated in the site, the site would at some point become pointless and perhaps cease to exist.”

“Moral of the story: Grow the [expletive] up and stop talking [expletive] on the Internet.”