E-Textbooks Saved Many Students Only $1 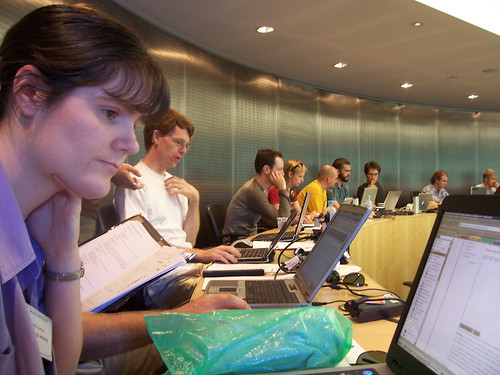 Despite the promise that digital textbooks can lead to huge cost savings for students, a new study at Daytona State College has found that many who tried e-textbooks saved only one dollar, compared with their counterparts who purchased traditional printed material.

Despite the promise that digital textbooks can lead to huge cost savings for students, a new study at Daytona State College has found that many who tried e-textbooks saved only one dollar, compared with their counterparts who purchased traditional printed material.

Perhaps the most surprising finding was the $1-dollar difference, which one course’s students encountered during three of the four semesters. The study’s authors attributed those slim savings to “publisher pricing decisions.” Making matters worse, the students renting e-textbooks could not sell the materials back to the campus bookstore when the semester ended. (In the second course surveyed, student savings were more significant, sometimes surpassing $40 per student.)

Survey results included in the study showed that students are clamoring for a cheaper alternative to traditional textbooks. Twenty-nine percent of respondents said they had avoided purchasing a textbook because of its high cost at least once, and nearly a quarter of respondents said they actually took fewer credit hours in a semester because of the cost burden of books.

Albert N. Greco, a professor of marketing at Fordham University’s Graduate School of Business who studies trends in the publishing industry, said he’s not surprised that students did not always save money through e-textbook rentals. And at smaller institutions where the cost of attendance is relatively low, he noted, the price of a digital textbook could still be out of reach for some students.

The electronic rental model caused a few other headaches for students and professors at the college, according to the study. Some students struggled to use the e-textbooks, thanks to disparities in basic computing skills. Those problems led some professors to spend class time conducting their own in-class tutorials, and even afterward a few said it was unclear who should be providing continuing technical instruction—faculty, campus IT staff, or representatives from the publishers.

Even students who adapted to the technology quickly sometimes struggled to open up the digital course materials during lectures. Wireless networks in classrooms where several students were using e-textbooks at once sometimes became overwhelmed, making access to publishers’ sites inconsistent.

As a result of these hiccups, more than half of survey respondents expressed dissatisfaction with the e-textbooks. However, most said they would still be willing to try e-textbooks—if the price were right. Specifically, respondents said they would consider the switch as long as they could obtain their materials for $35 or less.

Mr. Greco said he foresees continued adoption of the e-textbook model despite the challenges outlined in the study, in part because students are already adopting technology in other areas of their lives. “Students have clearly moved and accepted digital products,” he said.