Paid for and created by Utrecht University

‘My research focus changed after talking to children’

How Utrecht University takes public engagement to another level

One hundred and fifty professors in their gowns cycling through town. In the Dutch city of Utrecht it is a familiar sight. Every March professors cycle to a diverse range of primary schools and talk about their research to children for some of whom academic education is not an obvious option. Through this Utrecht University reaches over 3,000 pupils every year, underlining the importance of staying curious and asking questions. The professors on their bikes are a spectacular sight, but Meet the Professor is far from an isolated event ‘just for the stage’.

It is part of Utrecht University’s comprehensive public engagement program, stimulating all sorts of ways in which academic research activities and results can be shared with a general public. “This is not a matter of randomly broadcasting scientific findings to whomever wants to listen,” says program manager, Miranda Thoen.

“Public engagement is a two-way process between researchers and non-academics, generating benefits for both. It is as much about listening, dialogue and participation as it is about offering insights and knowledge. Citizens get a chance to be part of science and obtain more knowledge and understanding, and researchers are challenged in their way of thinking and get the opportunity to acquire new perspectives and ideas. This way – in society as a whole – rooted convictions are defied and more informed choices are made.”

Utrecht University has the ambition to significantly contribute to a better world and find solutions to the important issues of our time. “This starts with knowing what is actually happening in society,” says Miranda. “Therefore we aim to be an open community with plenty of room for dialogue and interaction between science and society. We help researchers and supporting staff to identify for whom their work might be interesting and relevant. And we offer them funding and training opportunities.”

“Our researchers, communication advisors, research support staff and policy makers being stimulated to undertake innovative research-related public engagement activities, has resulted in a variety of creative ways to interact with different groups. The examples are abundant.”

Take Madelijn Strick, Associate Professor Social Psychology and Lars Tummers, Professor of Public Management and Behavior. They joined forces with film director Ruud Bisseling and the Municipality of Utrecht to make a film about diversity and social segregation in Utrecht, encouraging people of different backgrounds to look at themselves and others without judgement or prejudice.

Madelijn: “The participants have been drawn from multiple social groups: university students, people with an immigration background, locals from the Tuindorp area and long-standing residents of the working-class neighborhood of Sterrenwijk. Our objective is to make a diverse group acquainted with the methodology and results of scientific research. So we will share the project’s intentions, results and conclusions through interactive discussions and clear explanations. We will also organize a return session, asking participants to play an active role by sharing their questions and experiences and to assess the extent to which their knowledge and understanding of scientific research has increased.”

Every October visitors of all ages and backgrounds can discover how diverse and fun science is during the Science Weekend.

Science for a festival audience

In July oceanographer and climate researcher Erik van Sebille, won the ERC Public engagement with research award 2020 in the category Press & Media. Out of 138 entries from twenty countries, the European Research Council rewarded three researchers who are not only great scientists, but also go the extra mile to communicate about science and engage with a wider audience.

“It is a great incentive to win this prize,” says Erik. “I get a lot of energy out of talking about the ocean, and it really helps to receive positive feedback on my media appearances. Giving compliments is important. It gives people the confidence to actually go out there (again) and engage with the press, with children and with other non-academics.”

I attach great value to the social contract of the academic community. We use tax money to do research, so it is our job to explain what we are doing and why this is useful.

Some scientists fear nuance being lost in media appearances: ‘What if my message is oversimplified?’ Well, I threw that thought overboard. As long as the key message remains clear, there is nothing against telling a simplified and accessible version of the story. There is no way you can ever be totally comprehensive.”

Erik: “I love interacting with all sorts of groups; for instance jointly thinking about what to do with plastic in the ocean. Primary school children repeatedly say: ‘Put the plastic in a rocket and shoot it into space.’ They say this because there is no life in outer space, so the plastic can do less harm there. This made me realize that the real problem is not so much the plastic itself, but the combination of plastic and life. So we should concentrate on places with a lot of life. My research focus changed from there being plastic in the ocean to where this plastic is. This change was a direct result of talking to those children.” 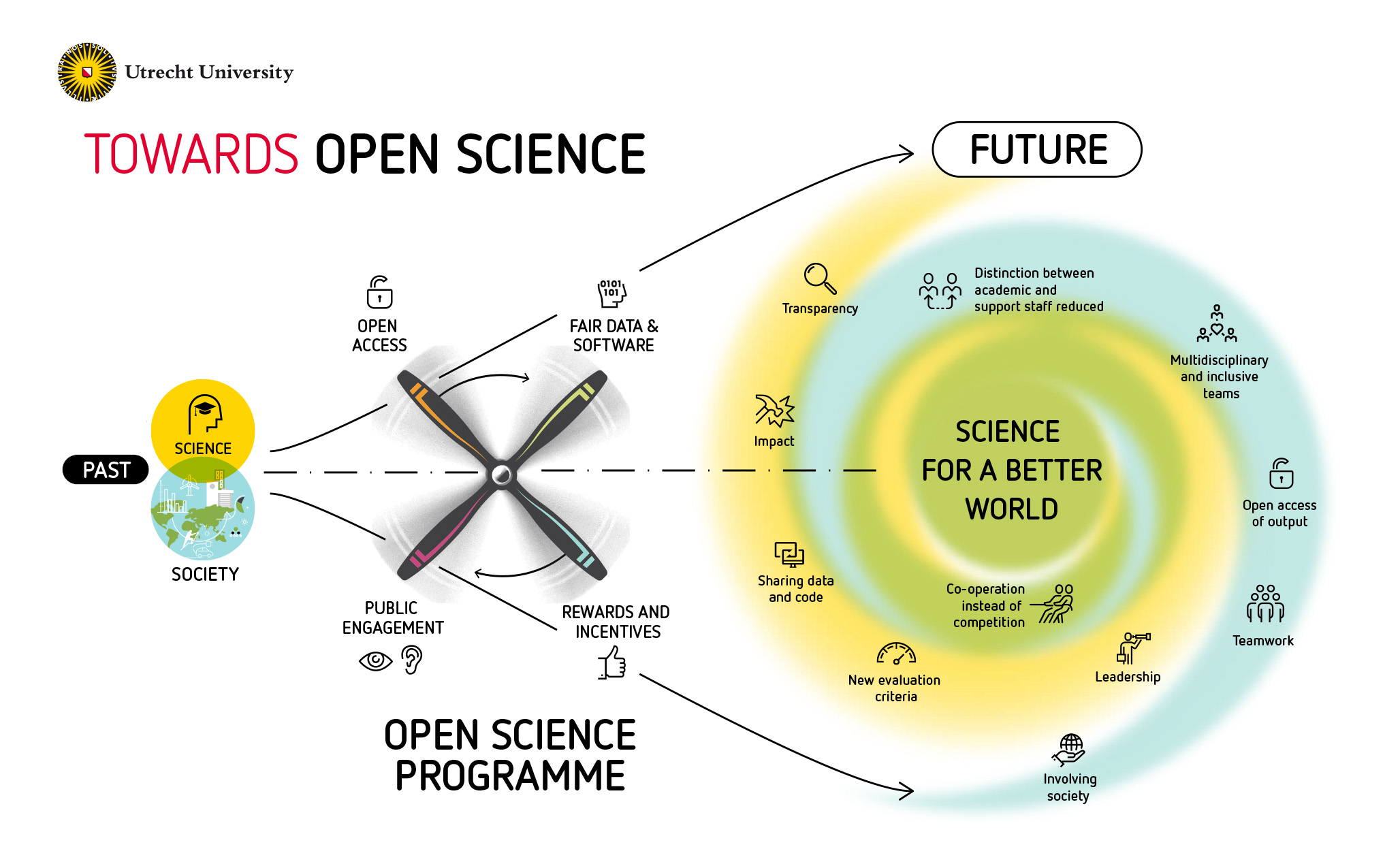 “At Utrecht University we attach great importance to open science,” says Maud Radstake. “Perhaps the COVID-19 pandemic has made the significance of unconstrained access to scientific information even more evident. And public engagement plays a substantial role in this accessibility.

Therefore - with open access, FAIR data and software and rewards and incentives - it is one of the four tracks along which we stimulate and facilitate researchers to put open science into practice. Femke den Boer, who leads the public engagement track with me, and I also aim to involve students. They need to recognize their responsibility to contribute to science and society as well, regardless of the career choices they end up making: within or outside the academic world.”

So how can we even better define, plan and measure the influence of science communication on the public? Madelijn Strick recently received a grant (together with researchers in Leiden) to develop a tool that will help do just that. “Measuring the impact of public engagement activities requires a very systematic way of thinking and a unique approach for each project. We need to know whom, what, and how.

Whom: We say we want to engage with ‘the broader public’, but we need to be more specific. Do we mean high school pupils, journalists, nurses, people who are skeptic about science, people who smoke? What: What kind of impact do we want to have? Which changes in knowledge, attitude or behavior are we after? And How: We need to develop a model describing the ingredients that will help us achieve our goals.

For instance, by comparing the audience members’ knowledge before and after a public engagement activity, we can evaluate the learning effect. In a similar way, we can track whether people’s trust or familiarity with science has improved.

Also - our analysis at the Betweter Festival showed - impact depends on: accessibility, interactivity, and personal relevance. The last ingredient appeared to be most important. Visitors need to be personally moved and learn something about themselves. We even saw this in their behavior: visitors who found the activity personally relevant were more inclined to leave their e-mail address to receive the newsletter.”

At the top of the game

Madelijn: “Recently I joined a public debate in Amsterdam where the organizers were much aware of the public engagement program at Utrecht University and they complimented me on it. I realized that Utrecht is at the top of the game and that I am very lucky to be part of this.”

This content was paid for and created by Utrecht University.

The editorial staff of The Chronicle had no role in its preparation.